1. "Much more than an archipelago" 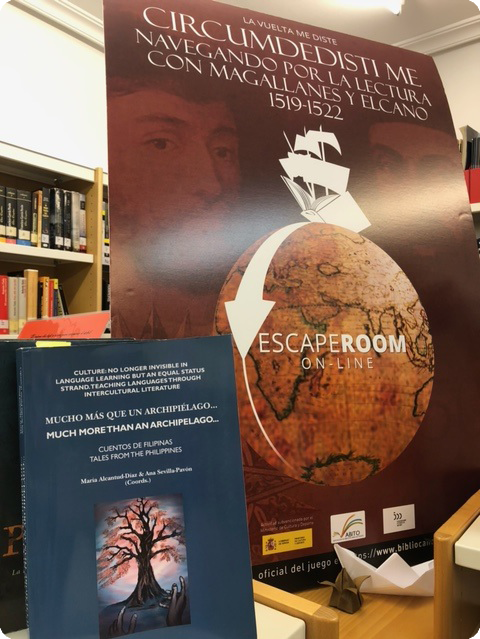 It is a collection of short stories from the Philippines. Every country, every language in the world has stories to tell. And with what they tell us in this book we can learn about the culture of spices, specifically in the Philippines
2. "The first travel around the world" 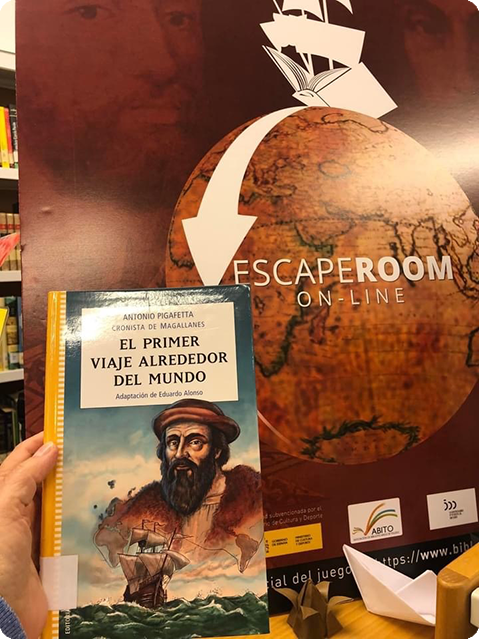 Narratives are a basic resource for the reconstruction of the first circumnavigation of the world. Emphasizing in the first place the chronicle of Antonio Pigaffeta, official chronicler of the expedition of Magallanes Elcano. Presented to King Carlos I in 1522, after his return, it was not published until 1550, when it was incorporated into the "first volume delle navigatione et viaggi" by Gian Battista Ramusio. Although for our game we have chosen this adaptation of Eduardo Alonso.
3. "Pequeño Malayali" 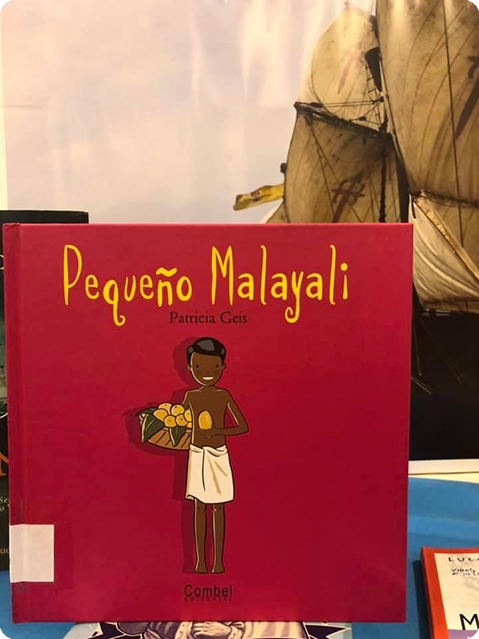 “And he returned to his house that smelled of cloves, cinnamon, cardamom, nutmeg, mustard, bay leaf and pepper”… Just the spices that our sailors were going to pick up!
Pequeño Malayli. Patricia Geis.
4. Elcano: Trip to history
Do you know how the pilots of the time managed to determine their position in the middle of the ocean?
Well, nothing better to find out than reading chapter VII of the book "Elcano: trip to history" in which D. Tomas Mazón explains it very well. 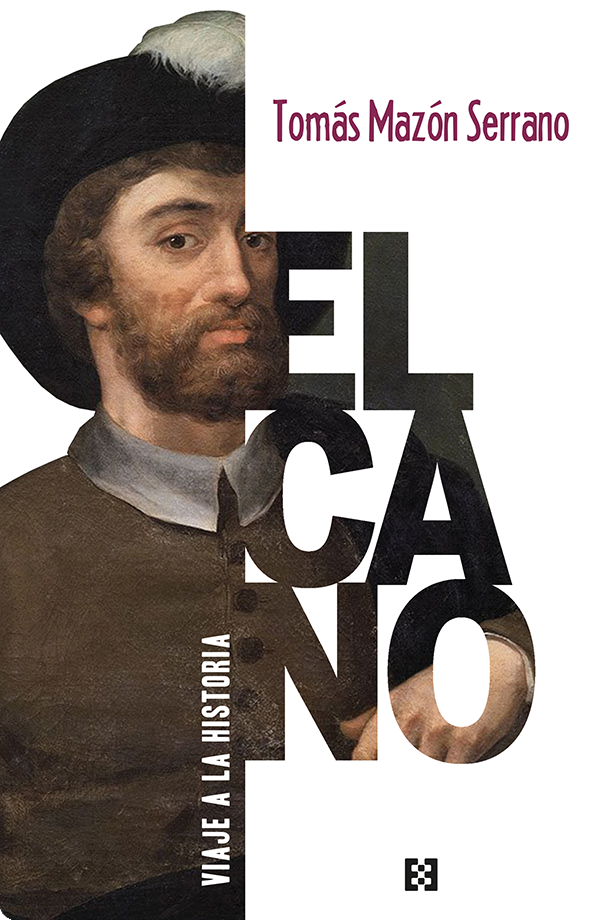 “Measuring the height of the sun above the horizon does not by itself provide any valid data on the position we occupy (…).
For this reason, if we want to find the latitude, we must use another datum, called declination”
5. Illustrated Atlas of the World 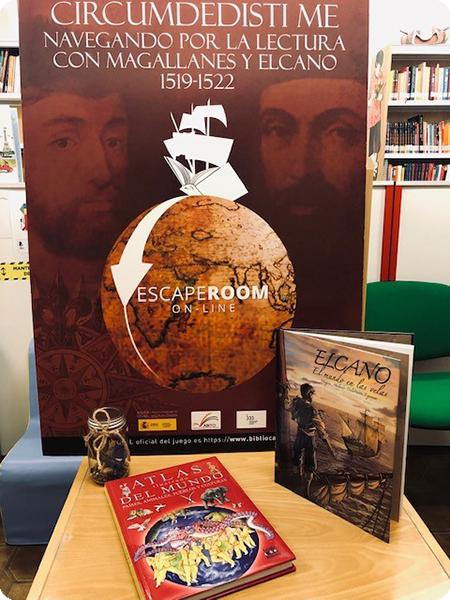 In the illustrated atlas of the world, we find curiosities like these that are related to our reading expedition:
"In Tierra del Fuego live native peoples such as the Onas, these people amazed the first European travelers for their ability to adapt to extreme cold weather conditions" 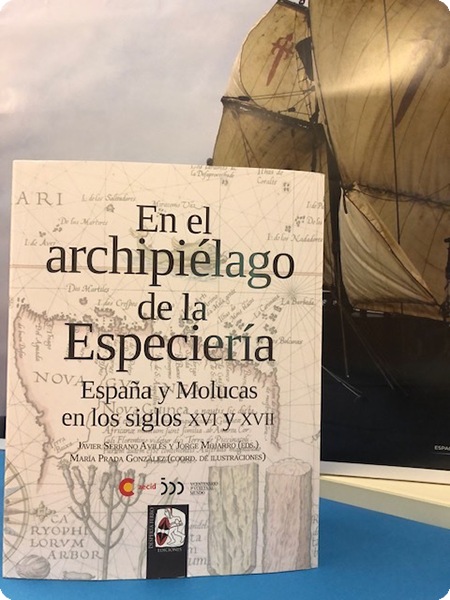 D. Emilio Lledó used to say how important it is to keep curiosity and interest in learning alive, but above all to read and be in contact with books, to cultivate freedom of thought, honesty and truth so that, like Heraclitus' river, life, our life, flow.

That is why from our Libraries we invite you to navigate through reading with books like this one that we bring you today as part of our Circumdedistime project. 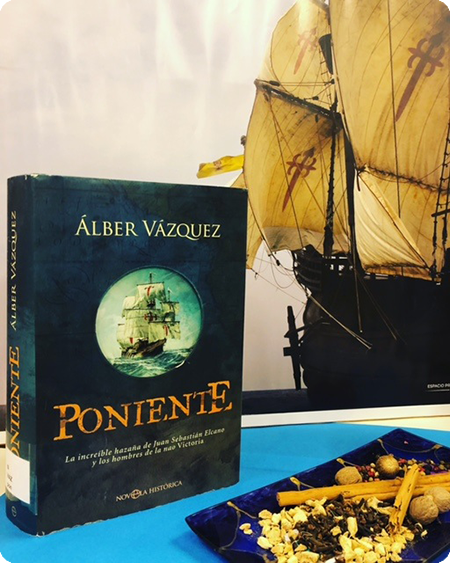 To give voice to the true protagonists of this event Álber Vázquez in his novel “Poniente”, has used a casual language for the sailors who discovered the true dimension of our planet earth. Unjustly forgotten, these characters tell us about human capacity, sacrifice, camaraderie and loyalty and all this in the first person!

A more than recommended reading for our clubs and readers to understand the daily life of the crew that #touredtheworld with Juan Sebastián Elcano.

We continue browsing with more readings… 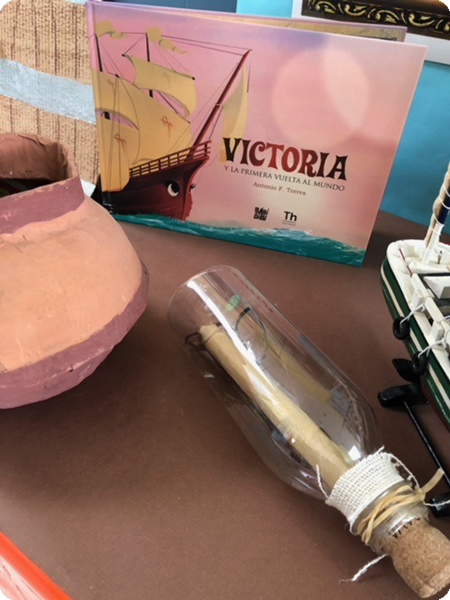 “It was a dangerous journey through unknown oceans, but I joined him: Seville was my port from then on, Magallanes my captain and Victoria my name“; This story by Antonio F. Torres, and illustrated by Sito Recuero, is part of the readings of our project. And it is very, very special since it tells us about forests, dreams, feelings... and in feminine!

And it is that, if there are stories that fall in love, this is one of them, for what it tells, how it tells it and its magnificent illustrations.

Do you need something else to come to our libraries and find out? Well, we will only tell you that it is making those who read it fall in love. 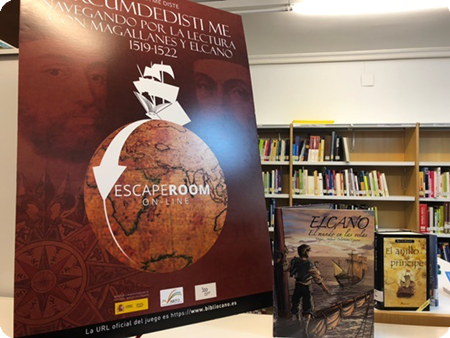 Five hundred years ago, Juan Sebastián Elcano was on one of the small islands of spices... at the other end of the world and this comic is also among the readings of our trip around the world. "Elcano: the world in the sails" by several authors, including the cartoonist Iñaki Holgado and the historian and writer Álber Vázquez, illustrates very well what that return trip was like in which storms and other dangers had to be overcome.. 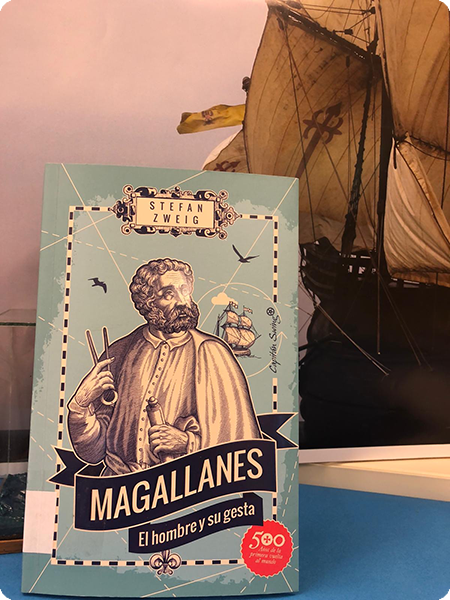 "In the beginning were the spices...Since the Romans, through their travels and their campaigns, began to find pleasure in the stimulating, calming or intoxicating ingredients of the East, Western lands no longer know how to do without spices." 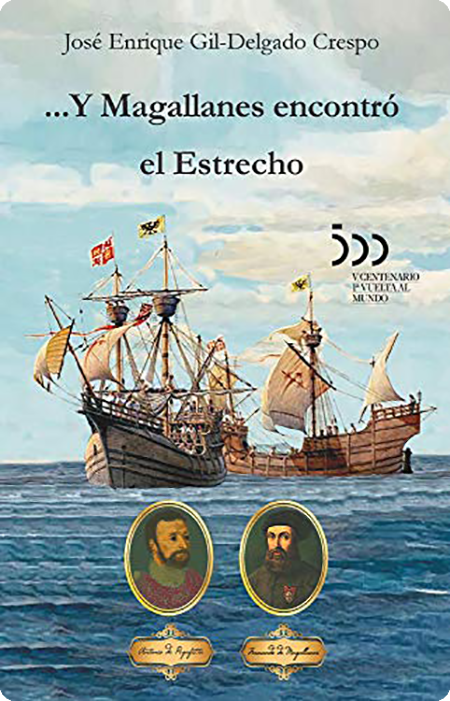 On his deathbed, the German cosmographer Martin Behaim reveals a secret to the Portuguese navigator Fernão de Magalhães, "a passage between the Atlantic and Pacific oceans that would allow reaching the Spice Islands, always sailing towards the West". Magellan appears before the King of Portugal offering to carry out the expedition, but is rejected. He crosses to Spain, where he is received by the king-emperor Carlos, who lends him his support and financing, the sailor undertaking the navigation that the official chronicler of the expedition narrates in great detail: Antonio de Pigafetta.


12. ...And Elcano circumnavigated the earth 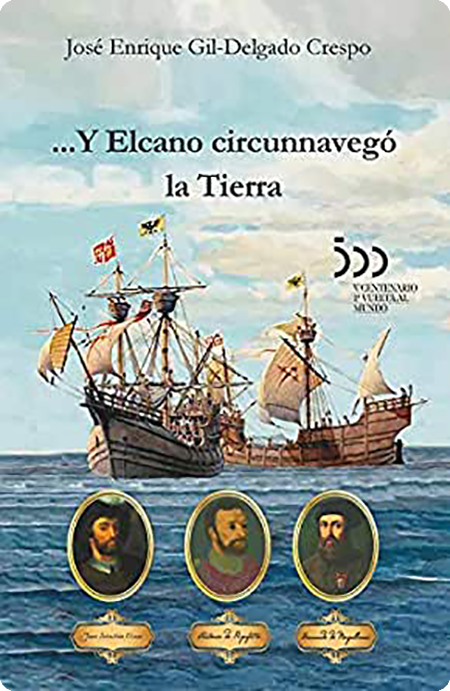 The novel in which readers will embark with Magellan and Elcano at the point where the Atlantic and Pacific oceans meet. From there they will sail through waters of an almost infinite extension. They will discover places of unusual beauty, they will be surprised to discover completely unknown cultures and they will be fascinated by the fauna and flora of places they had never heard of before. They will establish relationships with the chiefs and wrens of unknown tribes. They will enjoy the beauty of the natives of those lands. They will contemplate with astonishment the death of Magellan and will reach the Spice Islands under the command of Juan Sebastián Elcano with whom they will witness disputes, intrigues, riots, executions, cruelty, love, revenge, illnesses, deaths, miseries and heroism until they reach conclude with 18 men, aboard the ship VICTORIA, "the First Around the World"...

13. Philippines before Philippines. The San Lázaro Archipelago in the 16th century 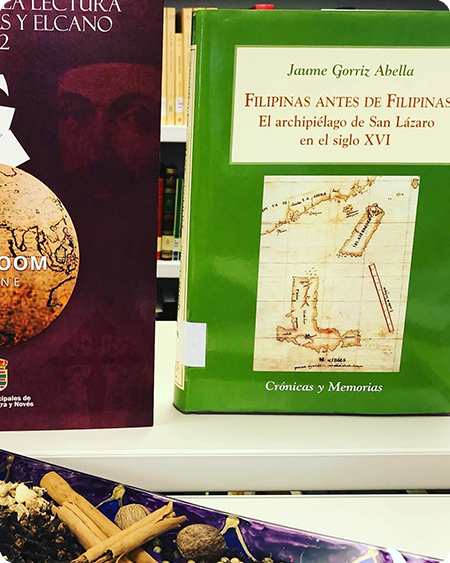 We approach the chronicles of the San Lázaro archipelago, as Magellan called it. And we will meet its first inhabitants: the "aytas", who had arrived before the last glaciation occurred. As well as Muslim groups in Mindanao, Sulu, Palawan, and southwestern Luzon; Islands that were part, together with the Moluccas, of a commercial network dominated by the sultanate of Brunei.

The passage of the Magellanic expedition through these islands, to the north of the Moluccas, opened a new scenario for European expansion. That was consolidated after the expedition of Miguel López de Legazpi in 1565 with the foundation of the first Hispanic settlement in Cebu. 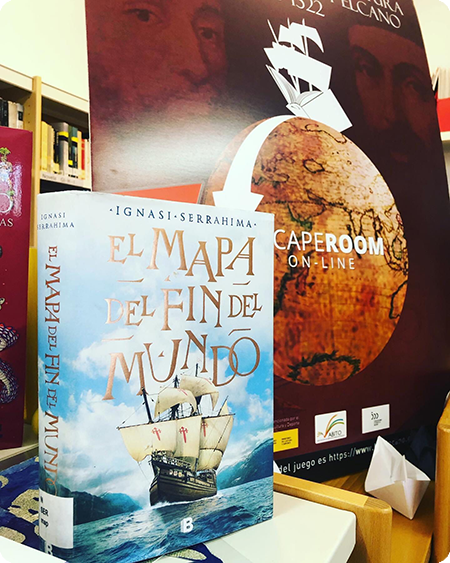 Ignasi Serrahima tells us about the last days of Juan Sebastian Elcano, when on his second trip to the spice shop he decides to write his memoirs and testament. A different and entertaining novel. 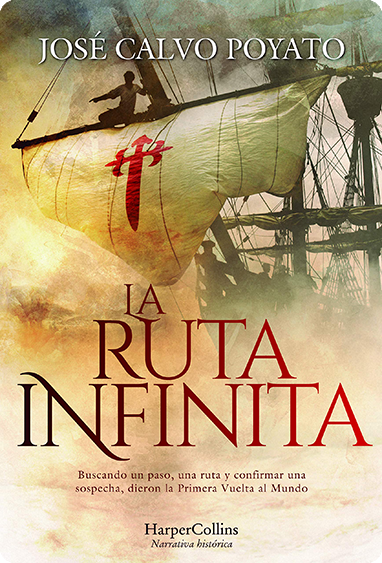 The author, José Calvo Poyato, makes a classic narration, strictly attached to the chronology of the trip, recreating first in what are the preparations for it and the palace intrigues for the different interests of the Portuguese and Castilian crown. Vibrant is the second part, in which events are precipitated, where the hardships and misgivings in the crew take us to the interior of the ship and shows us the greatness of these sailors, their knowledge of the sea, their sense of honor, and the courage that returned them to the port that three years before saw them leave.

The reading clubs of some municipal libraries, We will meet the author on Friday May 6 at the Library of Castilla La Mancha. 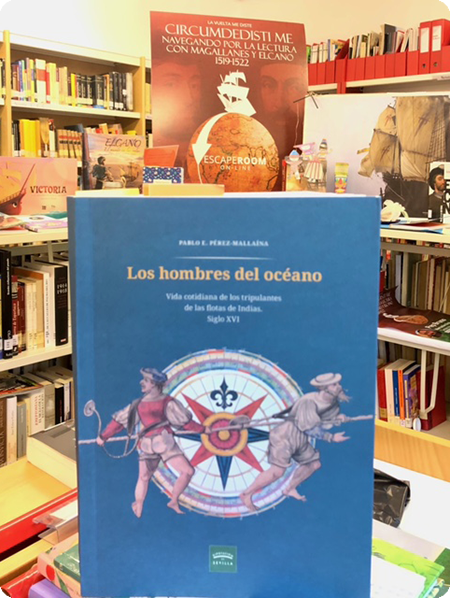 We continue browsing the reading, and this time we do it to learn about the daily life of the crew members in the fleets of the 16th century that its author Pablo Perez-Mallaína tells us so well. Whom we will have the chance to hear live at our next Circumdedisti me conference.