Our master readers are charting the course of their readerships in this mapping, following Pigafetta's tale. 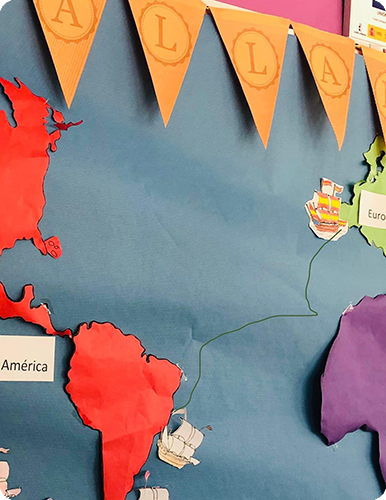 The Magallanes and Elcano Expedition passed the Equinoctial line, reaching what we know today as Rio de Janeiro, Brazil.

“How happy we were to see the coast of Brazil, a country in which all kinds of products abound. (...) With the natives we made very advantageous barter. For one hook they gave us five or six chickens; for a comb two geese, for a small mirror or a pair of scissors, fish to eat twelve people"

(A. Pigafetta. The first trip around the world. Adaptation by Eduardo Alonso)

In October 2020, the President of the Chilean Republic, Sebastián Piñera, inaugurated the “Circumnavigation” monument in Punta Arenas to honor the fifth centenary of the landfall of the Magellan expedition in the waters of the strait that received his name. This sculpture was made by the Chilean artist Francisco Gazitúa. It is an armillary sphere inside which is a representation of the Nao Victoria sailing west and with its main mast in the position that the axis of the earth would go. The mast, like the axis of the earth, is tilted 23 degrees. The lights of the work represent the constellation of Orion, which was part of the mythology of the Selknam people.

In the words of its author FRANCISCO GAZITUA:

“The sculpture is a metaphor for the globe.
The heart of this sculpture represents a ship: Nao Victoria
The main mast of this ship tilts 23 degrees to the axis of the earth.
The bow of the ship points towards the sky at night, pointing out two southern galaxies, which are baptized with the name: Magellanic Clouds
The horizontal circle shows the itinerary of the circumnavigation voyage with a fixed course to the west, illuminated by a single truth: The roundness of the earth.
The vertical circle is a symbol of the meeting, point of arrival of the first migrations, more than 10,000 years ago, the first nation and all subsequent ones.
In addition to being a monument-tribute to navigation and its repercussions on science, it is also a monument to geology and glaciations, to the process as South American Land, allowed the passage between the oceans and the glaciers that opened the second section of this bi-oceanic corridor, more than 10,000 years ago

The Color of the monument is that of the Lengas in autumn, which are the emblematic tree of Patagonia.

The illumination of the monument follows the order of the Orion constellation, sacred to the Celknam people”

As authors, Francisco together with the architect Marcial Cortes-Monroy, in very difficult pandemic conditions and tight deadlines, formed a team and together they managed to forge and cut 18 tons of steel, and then join them with about 1,500 meters of welding. For this, they had 80 specialists from different trades: Night merchants of sheet steel and profiles, blacksmiths, tracers, architects, designers, welders, engineers, transporters, mountain and road, merchant mariners, negotiators before the truckers' strike, and suppliers of oxygen for cutting and welding, (at that time intended for hospitals), crane operators, ship painters and warehousemen, ironmongers, maintenance mechanics for our machines and equipment, technical draftsmen, bench mechanics, soil mechanics and excavators , lenders and accountants.

After arriving at Cabo Deseado, and with two ships less in the fleet, the three ships Concepcion, Trinidad and Victoria cross the Pacific on an endless journey until they find land. It is March 6, 1521 when, after three months and twenty days of hunger and illness, according to Pigafetta, they arrive at an inhabited island: Guam.

This island is located south of the current Mariana Islands. And there the native language that our navigators knew is still preserved: the Chamorro, and in which we can find some words in Spanish. 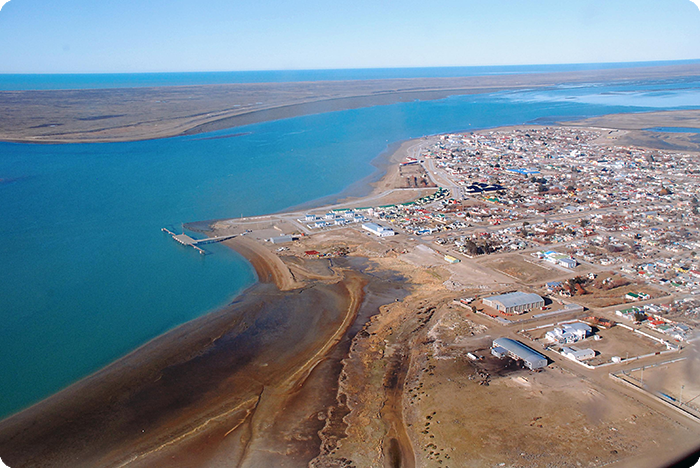 March 31, 1520
They arrived at Puerto San Julián, in southern Patagonia, to spend the harsh winter.
They could not find the dream strait, so the captains Juan de Cartagena, Antonio de Coca, Gaspar Quesada and Luis de Mendoza revolted.
Elcano himself was with the rebels and Magellan treated them harshly.

One year later, March 31, 1521
Easter Sunday of the Resurrection of Our Lord was celebrated on Earth, it is probable that Pigafetta refers to the Island of Mazúa or Limasawa, and this, according to the story, was thanks to “the good friendship that had been born between our captain general and the king of that island. 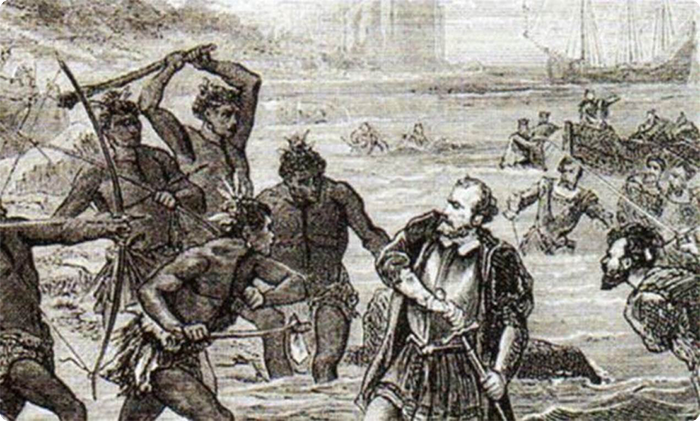 On April 27, Magellan lost his life on the island of Mactan. This is how he relates the ambush and death of the captain of the expedition Antonio Pigafetta:

“We jumped into the water, which was up to our backs, and had to splash to the beach, which was two good bowshots away, while our boats were left behind by the reefs. On the beach we found fifteen hundred of the islanders divided into three groups that, in the midst of shouting, surrounded us on the flanks, and the third attacked us head-on. Our captain divided his men into two groups. (...)

Realizing that our bust was protected under the coat, but not the legs, these were the object of his blows. The captain's right foot was pierced with a poisoned arrow. He then gave the order to fall back step by step, but almost all our men were fleeing in disarray, so that only six or eight remained with him and, since he had been limping for years, our retreat was slower. (...) they had noticed the presence of the captain and he was their favorite target; twice they hit his helmet and it rolled to the ground. But he, with the few who surrounded him, maintained his position, without trying to retreat, and we fought like that for more than an hour, until one of the Indians managed to hit the captain in the face with a cane projectile. Enraged Magellan pierced the attacker's chest with his spear; but it remained stuck in the body of the dead man and when the captain tried to unsheath the sword, he could not finish his action, because a pike that was thrown at him wounded him in the arm. When the opponents realized this, they rushed at him at the same time, and one of them opened such a wound with a saber in his left leg that he fell face down. Immediately, all the Indians jumped on him and riddled him with spears and other weapons. And so they took the life of the man who was our mirror, our comforter and faithful leader.